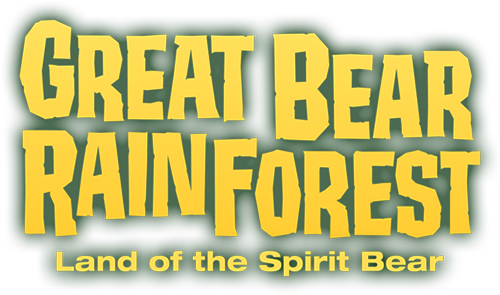 A Magical Environment. Unchanged for 10,000 years. 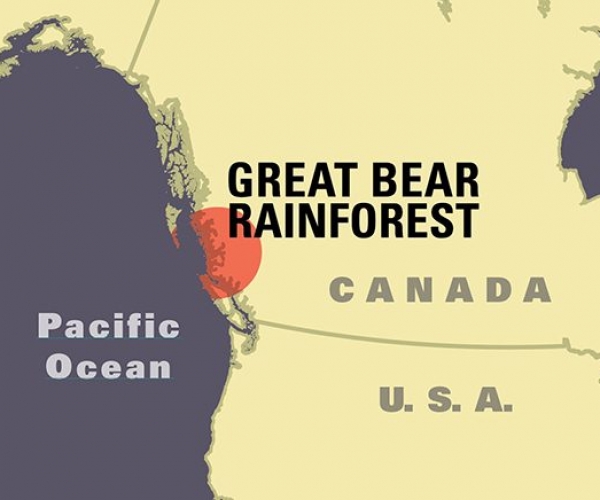 Journey to a land of grizzlies, coastal wolves, sea otters and the all-white spirit bear — the rarest bear on earth — in the film Great Bear Rainforest. Hidden from the outside world, the Great Bear Rainforest is one of the wildest places left on earth. Found on Canada’s remote Pacific coast, it is the last intact temperate rainforest in the world—a place protected by the region’s indigenous people for millennia. Now, for the first time ever, experience this magical world in IMAX and giant screen theatres, and discover the land of the spirit bear.

WHAT IS A SPIRIT BEAR?

The spirit bear is a subspecies of the North American black bear that has white fur due to a rare genetic trait. Spirit bears are only found in the Great Bear Rainforest. No one knows exactly how many spirit bears there are, but estimates range from 50 to 100. They truly are the rarest bears on earth!

GUARDIANS OF THE FOREST

Since the last Ice Age, First Nations people have lived among the bears in the Great Bear Rainforest. Their living history is inseparably connected to the vibrancy of the rainforest, which they have protected for thousands of years. Today, indigenous youth are coming together and taking responsibility for this place they call home. Learn more about their work in Great Bear Rainforest.

Invite your students to have a learning experience they won’t forget! Book a field trip to see Great Bear Rainforest and become immersed in the biology, geography, environmental sciences and other key school curriculum. Download the Educator Guide for hands-on activities aligned with Next Generation Science Standards (NGSS) and Common Core ELA and Social Studies. Schedule your field trip now by contacting your local IMAX theatre for information about special group programs. 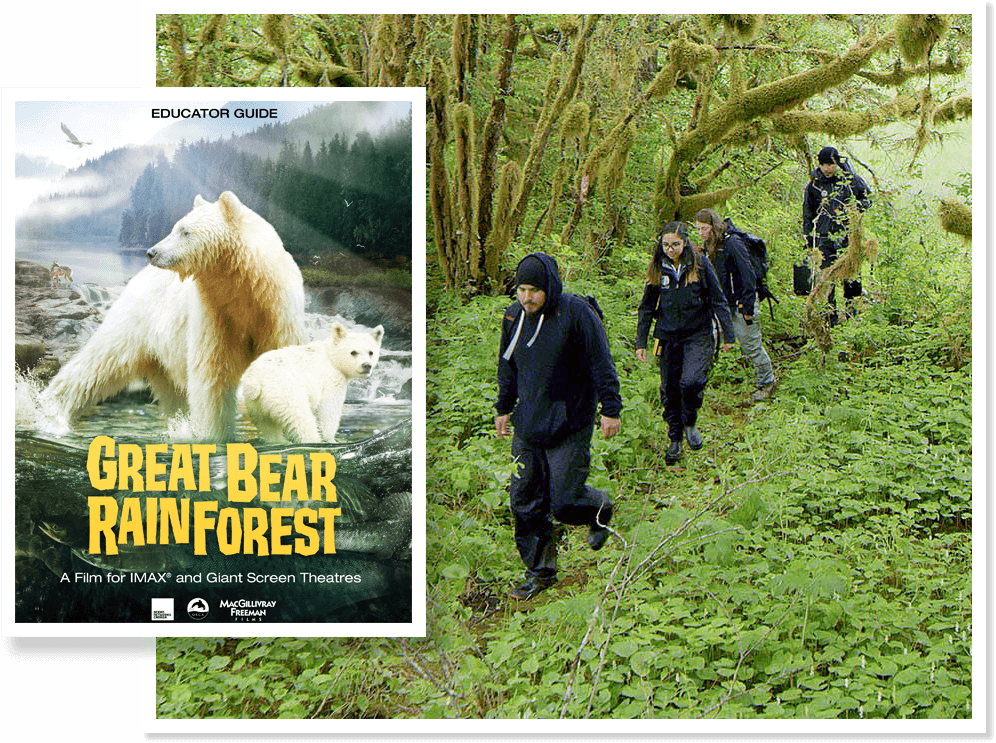 Please check back for updates. We are still adding theatres.

FILMING IN THE RAINFOREST

Filming in the remote Great Bear Rainforest presented a unique set of challenges for filmmakers Ian McAllister and Jeff Turner. Over the three years it took to make this film, the crew faced everything from extreme weather, unpredictable wildlife, and the daily rigors of being in a rugged environment far removed from modern conveniences. But this also pushed the filmmakers into fresh creative territory where every shot was carefully planned out and new filmmaking techniques were deployed. Learn more in this interview with director Ian McAllister, who has worked and lived in the rainforest for 30 years. 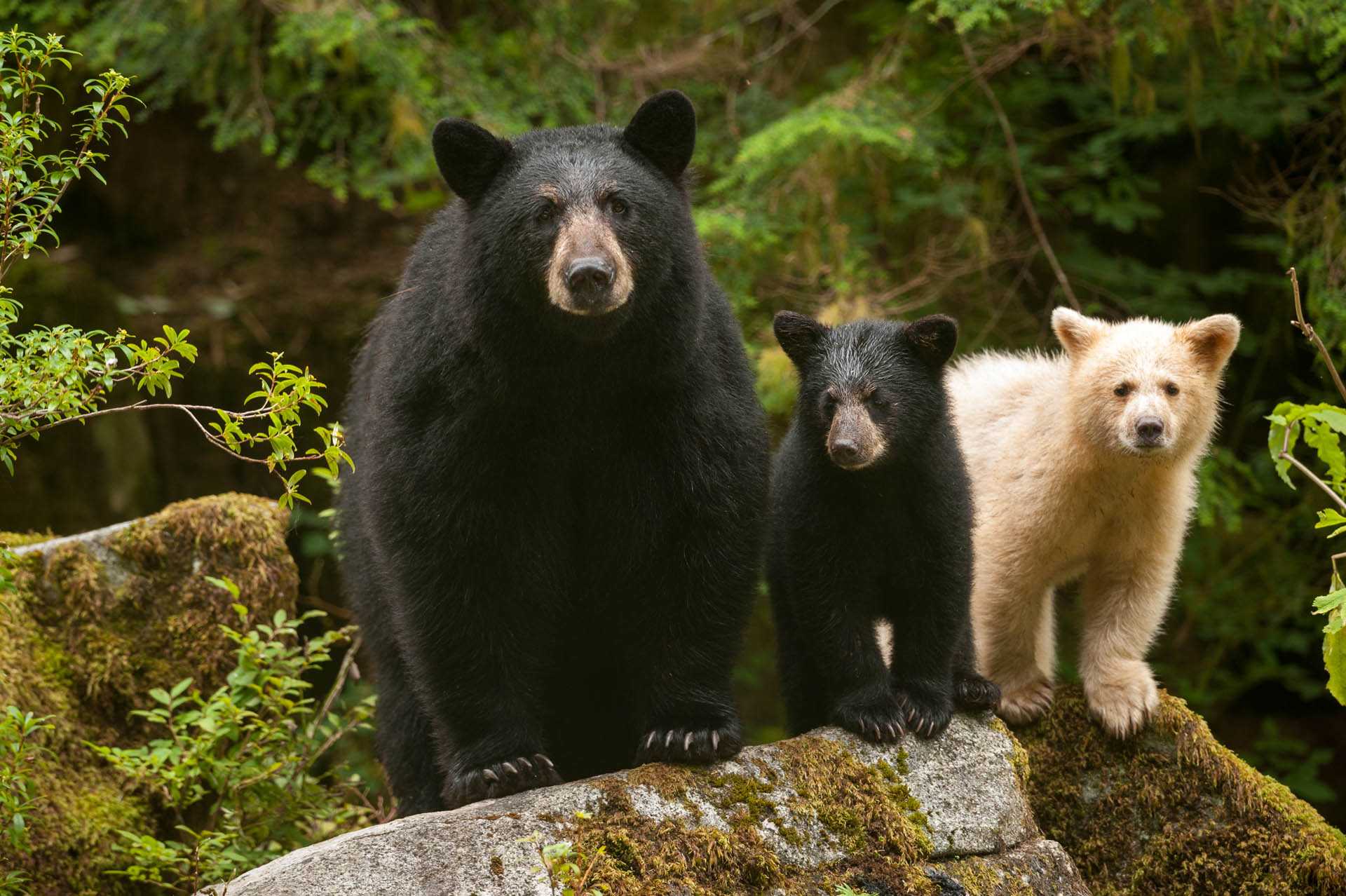 To learn more about the Great Bear Rainforest and how you can help protect the spirit bears and their ancient forest home, visit PacificWild.org.  Each of us can make a difference in helping preserve this unique environment, one of the last truly wild places on earth.

Get the companion book! Go behind the scenes and immerse yourself in the making of this epic film. Discover fascinating facts and crew insights, learn about the people who make their home in the rainforest and are committed to its protection, and find out about the incredible challenges of filming in this remote area.

Great Bear Rainforest is a Spirit Bear Entertainment film presented by Seaspan in association with Destination BC and distributed by MacGillivray Freeman Films.

Invite your students to have a learning experience they won’t forget! Book a field trip to see Great Bear Rainforest and learn more about biology, geography, environmental sciences and other key school curriculum. Download the Educator Guide for hands-on activities aligned with Next Generation Science Standards (NGSS) and Common Core ELA and Social Studies. Schedule your field trip now by contacting your local IMAX theatre for information about special group programs.

Q: The Great Bear Rainforest is your home and a place that you clearly love and have passionately advocated for and also have documented in so many different ways, from photography to writing. What led you to start thinking about making a big-screen film about this very special place?

I was fortunate to be first introduced to the Great Bear Rainforest about 30 years ago, when what I thought was going to be a one-week exploratory trip turned into a 30-year journey. Making a giant screen film about this area has been on my mind for a long time. I actually first brought an IMAX director up to the rainforest about 20 years ago. But the timing wasn’t right yet. The noise and size of the IMAX technology at that time were just too incompatible with the natural rhythms of life in the rainforest.

It’s super exciting that digital technology has finally caught up with the need to move quietly and with flexibility in order to capture rarely documented wildlife behavior. We just kept pushing the technology to the max and while it was a big learning curve for everyone, we ultimately achieved our goal of representing some of the most intimate wildlife sequences both above and below the water that would have been impossible with the technology of just a few short years ago.

Q: Given how incredibly vast and bio-diverse the rainforest is, how did you even begin to choose what to focus on?

Trying to put my 30 years of experience in the Great Bear Rainforest into 41 minutes sometimes felt impossible to me. But what was most important to me was inspiring people about this place. I wanted to show how it all begins with the life in the ocean, and how there is this unique interface here between ocean and rainforest. I hope we found a balance that represents the beauty, the grandeur, the intimacy and the elegant nature of this place, all woven together with the stories of the fiercely independent First Nations cultures, who have been protecting it for thousands of years.

Q: How long was the overall shoot?

Originally, we were going to shoot for two years but we were lucky to be able to shoot for three full seasons. Certain events that we wanted to film only take place a few days a year so if your cameras aren’t working or your boat needs repair or you get there just a hair late, you miss that small window of opportunity until next year. So it really made a difference to have three years to make sure we packed in every last bit that we could.

Q: The film gets very up-close-and-personal with bears of all kinds, including the fabled spirit bears, which have never been seen this way before, where you really get to know a family of the breathtaking bears. Obviously you have to be really comfortable with the bears to film them so closely. How do you read them? Do you ever worry about situations with them?

Since most of my life has been about bear conservation, I’ve spent lots and lots of time in very high bear-density areas of Canada. These bears are well-fed, they live in an incredibly rich environment, which means their reproductive rates are higher than their continental kin, which in turn means their stress levels are lower. So, as long as you’re not stealing their cubs or taking a salmon out of their mouth, they’re pretty tolerant! There’s also this long-lived human relationship with the bears where First Nations people have lived alongside them and fished alongside them for centuries and centuries.

I also did a lot of shooting just by myself with a camera rig, which works well for the bears. If they see one person, that’s often okay, but if there are three people coming at them, they are more like “oh, this isn’t so good.” Wildlife often responds better to one person. Understanding the intentions of one person is a lot different than trying to figure out multiple people.

Q: You couldn’t have predicted in advance the torrential storm and the mudslide that destroys the stream where the bears, and other animals, are feeding in the very important buildup to their winter hibernation. How did that sudden occurrence impact the production?

It was a really dramatic event. It happened in our second year of filming when there was an unprecedented, historical rain event that brought the side of a mountain down completely burying the estuary and the salmon. To see the spirit bears and sea-wolves we had been watching just the day before fishing in crystal clear waters now wandering around in disbelief, it was truly heartbreaking. It was hard not to be dismayed because we understood that stream might never recover. But as documentary filmmakers we kept shooting, and eventually the story of the landslide made it into the film.

Q: You have captured so many unprecedented wildlife moments in the film. Do you have a favorite?

I especially like the way the herring sequence came together. I’m very glad that we found a way to tell the story of the herring, which is so culturally and environmentally vital to all the life in the rainforest. In the beginning, many people expected that the film would just be about the spirit bear, and it is about the spirit bear, but I’m glad that it is also about so much more. I wanted the film to be very much about the ever-shifting interface of these two different worlds of ocean and forest—and it all begins with the power of life in the ocean.

The surf scoter sequence is also something that has never been filmed before. No one has ever filmed them from deep below the surface. To have 10,000 surf scoters blocking out the light above you, and then suddenly start diving, while you watch them intimately feeding on herring eggs 20 or 30 feet under the surface—that was super cool. The surf scoter is just one of countless species who rely on the herring, but I was stoked to get these very unique shots of them.

Q: You’ve collaborated closely with the First Nations communities who have traditionally protected the rainforest throughout your 30 years there. How important was having their input on the film? How did you decide which of their stories to tell?

It was always essential to us to have the First Nations deeply involved, to hear them reflecting on their traditional ecological knowledge and describing their relationship to the natural world and what the spirit bear, grizzly bear, whales, herring and so much more means to them. We talked about all these ideas very early on. It was important to us to talk sincerely with the local communities, so we went to each of them and explained what we were hoping to do with the film and then we took their advice and direction. We wanted to spotlight real people, especially young people, and real things that are happening in their communities.

What do you most hope a young person sitting in the theatre who maybe never had even heard of the Great Bear Rainforest takes away when she leaves?

I hope people leave the theatre with a sense of real hope, knowing that places so valuable ecologically and culturally still exist and still can thrive, and seeing that ecological protection can be something exciting and beautiful, rather than dark and difficult. Maybe some will also be inspired to engage with the rainforest in their own way, or to get involved in environmental work, which doesn’t have to mean becoming a scientist. There are countless skills that can play a role in helping to protect places like the Great Bear Rainforest—from science to the arts to logistics…and even entertainment.